Melanoma is a type of cancer that begins in the skin. It is completely curable when detected early, but can be fatal if it progresses and spreads. Melanoma is a cancer of the pigment producing cells in the skin, the melanocytes. Normal melanocytes reside in the outer layer of the skin and produce the brown pigment melanin, which is responsible for the color of our skin. Melanoma occurs when melanocytes become cancerous, grow, and invade other tissues.

Although it is not clear how all cases of melanoma develop, it is apparent that excessive sun exposure, especially severe blistering sunburns during childhood, can promote melanoma development. There is also evidence that ultraviolet radiation used in indoor tanning equipment may also predispose to melanoma. Anyone can get melanoma, but fair skinned sun sensitive people are at greater risk.

In addition to sunburns early in life, people with many moles are at greater risk to develop melanoma. Everyone has moles, usually around 30, and most are without significance. However, people with more than 50 moles have an increased risk. In addition to the number of moles, some moles are unusual and irregular looking. These moles are known as dysplastic or atypical moles. People with atypical moles may be at increased risk of developing melanoma. Melanoma does run in families. If a close relative, such as a parent or sibling has had melanoma, then other blood relatives are at increased risk for melanoma. If you have some of these risk factors, periodic routine skin examinations by your dermatologist can truly be life saving.

Almost always, melanoma begins on the surface of the skin where it is easily treated. However, if given time, it can eventually grow down in the skin, reaching the blood and lymphatic vessels and spreading in the body, causing life-threatening illness. Therefore, the goal is to detect melanoma early, when it is still on the surface of the skin. Melanoma can occur anywhere on the skin, even in places not directly exposed to sun. However, it is most common on the backs of men and the legs of women. Melanoma is usually brown or black colored, but sometimes, though rare, may be red, skin colored, or white. Melanoma may also arise from a pre-existing mole, or appear on previously normal appearing skin. Melanomas slowly get larger; therefore, growing, changing, or irregular lesions should be evaluated.

The best treatment is early detection. A look from the trained eye of a dermatologist can confirm whether or not a lesion is suspicious for melanoma. If so, the next step is to perform a biopsy. The area is made numb the lesion is removed for examination under the microscope. This simple, quick procedure is performed in the dermatologist's office. If a melanoma is detected, treatment is guided by the depth of the lesion. 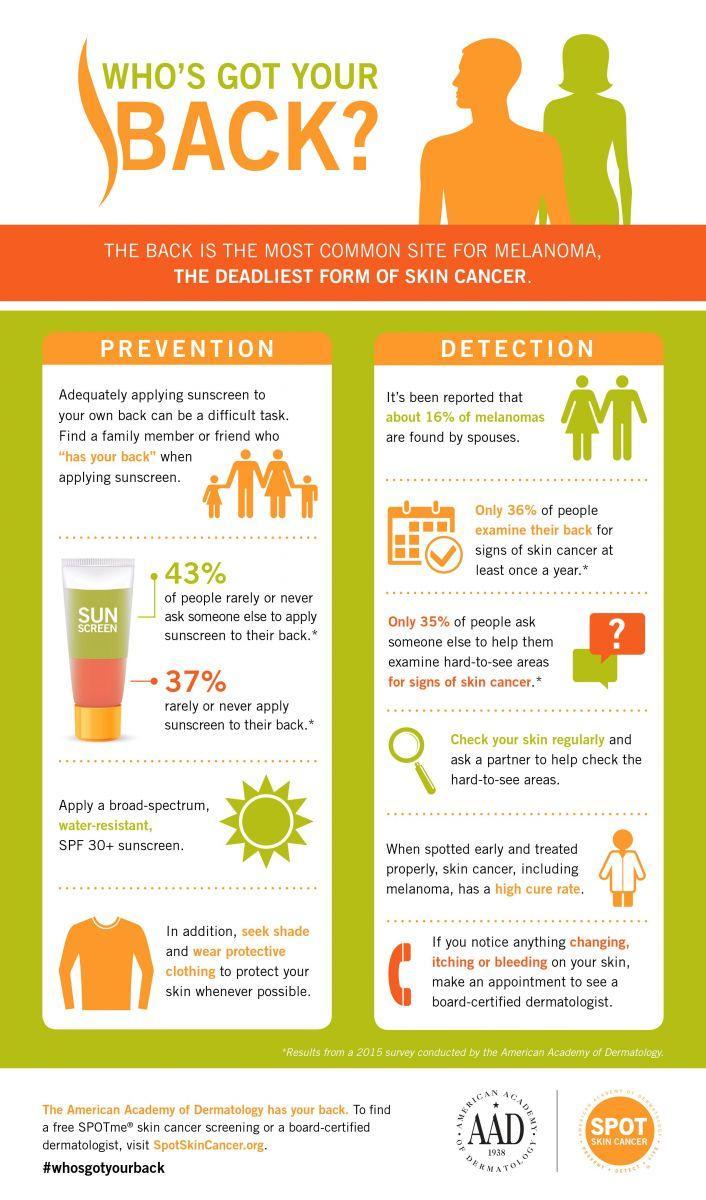 Treatment for melanoma begins with the dermatologic surgical removal of the melanoma and some normal appearing skin around the growth. Removal of the normal appearing skin is known as taking margins, and is done to be sure no melanoma is left behind. A person's outcome depends on how deep the melanoma is in the skin. Early melanoma limited to the outermost layer of the skin (the epidermis) is known as melanoma in situ and simple surgical removal produces virtually a 100% cure rate. However, if left untreated, the melanoma grows deeper in the skin. The deeper it goes, the more likely it is to reach a blood vessel or lymphatic channel, leading to metastasis and a life-threatening situation.

Excessive exposure to ultraviolet radiation a significant contributor to melanoma. Childhood and adolescent exposure seem to be the most damaging, so protecting young people is very important. Avoid sun exposure from 10:00 a.m. through 4:00 p.m. when the sun is the strongest. Apply an adequate amount of a broad-spectrum sunscreen that blocks both UVA and UVB, and reapply every 2 hours. Wear a hat, and clothing with a tight weave that will block ultraviolet light. Remember, a white cotton T-Shirt only blocks 50% of the suns rays. Avoid sunbathing and indoor tanning.

Early detection remains the best treatment. Therefore, perform a monthly self-exam, looking for irregular lesions that are growing and changing, and use the ABCD rules. If you have an atypical mole, see a dermatologist immediately. Lastly, see a dermatologist at least once a year for a complete skin exam.

The ABCDs of Melanoma

Meaning one half is different than another. Melanomas are usually asymmetric.

The edge, or border, of melanomas are usually ragged, notched, or blurred.

Benign moles are only one color. Melanoma often has a variety of hues and colors within the same lesion.

Melanomas continue to grow, while moles remain small. If the lesion larger than a pencil eraser or is growing, that is cause for concern.

In recognition of Melanoma Monday® and Melanoma/Skin Cancer Detection and Prevention Month® in May, the American Academy of Dermatology is asking “Who’s Got Your Back?” when it comes to applying sunscreen and examining your skin for suspicious spots. Click here to learn more!

< Back to main page